Shingles (herpes zoster) is an outbreak of rash or blisters on the skin that is caused by the same virus that causes chicken pox. The first signs of shingles is often burning or tingling pain, numbness, or itch, generally on one side of the body. Of those over 50, 99% are infected with the virus. Almost 1 out of every 3 people in the United States will develop shingles in their lifetime. There are an estimated 1 million cases of shingles each year in this country. Anyone who has recovered from chickenpox may develop shingles; even children can get shingles.

Some people are at a greater risk of shingles, including people who:

Most people who develop shingles have only one episode during their lifetime. However, a person can have a second or third episode. 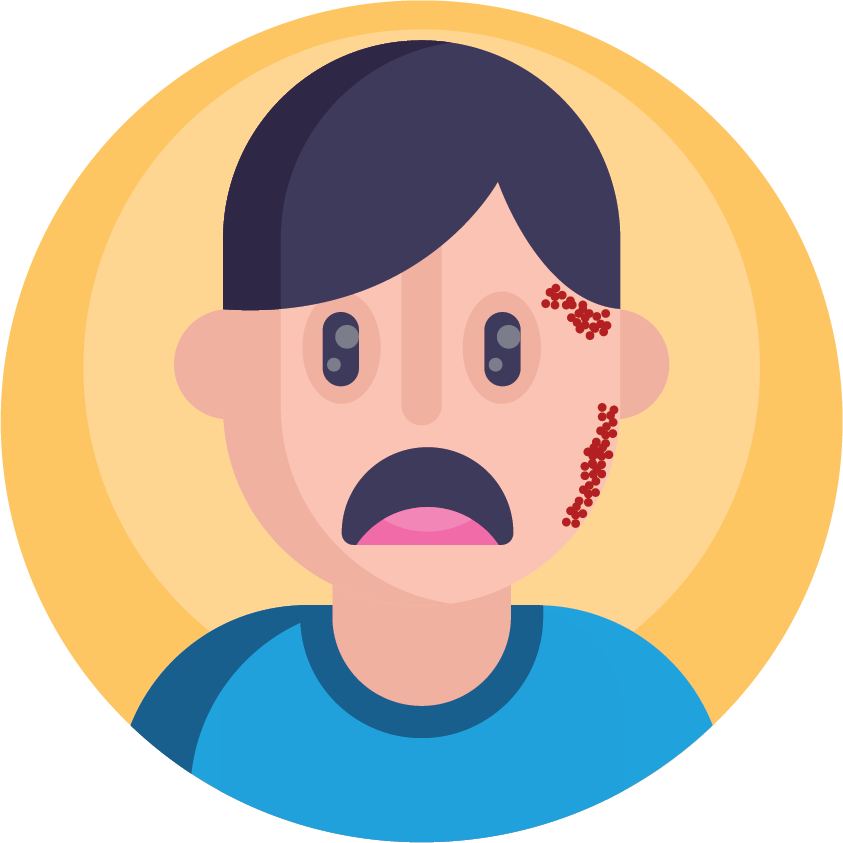 Shingles is a painful rash that develops on one side of the face or body. The rash consists of blisters that typically scab over in 7-10 days. The rash usually clears away within 2-4 weeks, Before the rash develops, people often have pain, itching, or tingling in the area where the rash will develop. This may happen anywhere from 1- 5 days before the rash appears.

Typically the rash pops up in a single stripe around the either the left or right side of the body. Some may have the rash appear on one side of the face. In rare cases, the rash may be more widespread and look similar to chickenpox. In these cases, people tend to have weakened immune systems. Shingles can affect the eye and cause loss of vision.

Shingles is caused by the varicella zoster virus (VZV). After a person recovers from chickenpox, the virus stays dormant (inactive) in the body. Scientist aren’t certain why the virus can reactivate years later – causing shingles.

Shingles cannot be passed from one person to another. However, the virus that causes shingles can spread from a person with active shingles to cause chickenpox in someone who had never had chickenpox or received chickenpox vaccine.

The virus is spread through direct contact with fluid from the rash blisters caused by shingles. A person with active shingles can spreads the virus when the rash is in the blister-phase. They will not be infectious before the blisters appear. Once the rash develops a crust, the person is no longer infectious.

If you have shingles, you should:

Several antiviral medicines—acyclovir, valacyclovir, and famciclovir—are available to treat shingles and shorten the length and severity of illness. People with shingles should start taking these medicines after the rash first appears to be most effective. People who have, or think they might have, shingles should call their healthcare provider as soon as possible to discuss treatment options.

The most common complication of shingles is a condition called postherpetic neuralgia (PHN). People with PHN have severe pain in the areas where they had the shingles rash, even after the rash clears up. The pain from PHN may be severe and debilitating, but it usually resolves in a few weeks or months. Some people can have pain from PHN for many years and it can interfere with daily life.

A person’s risk of PHN also increases with age. Older adults are more likely to have PHN and to have longer lasting and more severe pain. About 10 to 13% of people who get shingles will experience PHN. PHN occurs rarely among people less than 40 years of age.

The only way to reduce the risk of developing shingles and the long-term pain from postherpetic neuralgia (PHN) is to get vaccinated. The CDC recommends that healthy adults 50 years and older get two doses of the shingles vaccine called Shingrix® to protect against shingles and the complications caused by the disease. Shingles vaccine is available in pharmacies and doctor’s offices. Talk with your healthcare professional if you have questions about shingles vaccination.

About the Shingles Vaccine